Natural Defenses, and whatever was close to paw

Basil Stag Hare was a Mossflower Woods resident and an expert in camouflage. Well-known for his appetite, he became a close ally of Matthias and later relocated to Redwall Abbey. He was an old friend of Constance.

Basil's military experience included service as an Officer Cook in the 67th Paw an' Mouth Long Patrol under Colonel Puffscutt, as well as service as a member of the Fur and Foot Fighting Patrol and an outfit known as the 47th Hare Border Rangers. Basil greatly admired stags, whom he thought of as noble, and took some inspiration for his middle name. His battlecry was "Give 'em blood and vinegar!"

When in contact with the plant thyme, Basil was prone to sneezing.

Basil knew Captain Snow, whom he had rescued from a fallen tree, and Squire Julian Gingivere. He and Jess Squirrel recovered the tapestry of Martin the Warrior from Cluny the Scourge, during which he suffered a self-described "honorable war wound."

Basil later had a nephew (or other type of relative), Tummscoff Stag Vittlesmythe, who liked calling him "Nunky Baz." Basil greatly disliked this nickname, and eventually persuaded his nephew not to address him as such.

Basil assisted Matthias in rescuing kidnapped Redwallers from Slagar the Cruel. Throughout the trip, he became fond of Cheek. He also proved essential in the assault on Malkariss' kingdom. Afterwards, he adopted Cheek, who renamed himself Cheek Stag Otter.

In Pearls of Lutra, it is stated that after Basil's death, Redwall Abbey did not have a hare until the arrival of Clecky. 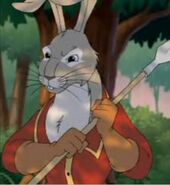 In The Redwall Warrior's Code, a short story that occurs prior to Redwall (but was written many years later), Basil Stag Hare appears to be a Redwall Abbey resident, as he's present in The Kitchen, and knows Matthias, as well as other Abbey dwellers. However in Redwall, he meets Matthias for the first time in Mossflower Woods.