Boar the Fighter was a male Badger Lord who ruled Salamandastron during the events of Mossflower. He was the father of Bella of Brockhall, the son of Brocktree, the grandson of Stonepaw, the grandfather of Sunflash the Mace, forefather of Rawnblade Widestripe, a descendant of Lady Sable Brock, and father-in-law of Barkstripe. During his childhood in Mossflower Woods, he was a friend of Old Dinny. Prior to ruling Salamandastron, Boar was the leader of the woodlanders in Mossflower. After he left, Barkstripe replaced him. Physically, he was an aging badger with silver fur and a long beard. He was also very wise, if a bit short-tempered. His primary weapon was an enormous, double-pronged broadsword.

Bella thought that only Boar could bring an end to Tsarmina Greeneyes' evil reign over the woodlanders. Boar had left many clues to find Salamandastron, for the next male badger to become his successor. Martin the Warrior, Gonff the Mousethief and Young Dinny the mole, later accompanied by Log-a-Log Big Club then traveled to Salamandastron in order to convince Boar to return to Mossflower Woods and fight the wildcat.

However, Boar refused and instead reforged Martin's broken sword into a magnificent blade made of metal from a falling star. The badger, an extremely talented swordfighter, taught Martin how to wield the sword with terrific skill. Afterwards, having learned of his fate from cryptic writing in his chamber, Boar engaged in combat with his mortal enemy, Ripfang, and his crew. Boar destroyed his enemy but also perished in the battle.

After his death, Boar appears with his father Brocktree and son-in-law Barkstripe in a vision to Sunflash telling him he must live on and become the Badger Lord of Salamandastron.

Two young hares of Boar's Long Patrol, Breeze and Starbuck, also served under Boar's grandson, Sunflash, when he took his place at the mountain many seasons later. 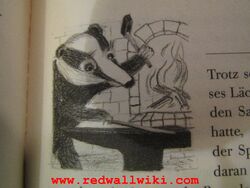