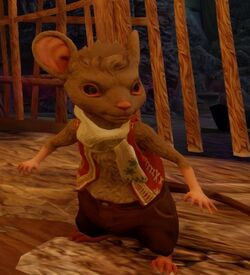 Brunach Wheelwright was a Lilygrove resident and the betrothed of Foxglove Brooker; the pair have intentions of marrying. Both were captured by sea rats after fleeing Lilygrove and imprisoned in Camp Silversands where they were forced to move barrels. Sophia Ryemaid rescued them.

Brunach is a handsome and proud young mouse who might one day make a fine warrior - if his hot head doesn't get him killed first. He was itching to stay and fight the rampaging rats in Lilygrove, but a fleeing and pleading Foxglove, his beloved, got him to change his mind.

He's the town macho-mouse: good looking, strong, bold...but also stubborn, brash, and proud. The Scout life was too complacent for his liking, but he'd sign up to be a warrior in an instant if it weren't for his relationship with Foxglove, for whom he would lasso to the moon if he could.

He's quick to volunteer for tasks that let him flex his strength or put him in a position of authority. He has some ideas about efficiency and productivity that he's certain will improve all of Lilygrove, if only the laid-back farmers would just take his advice already!

Even so, he's a sociable enough fellow who can get along with just about anyone for at least a short while. He happily takes the role of protector, but struggles to ask others for help. He's also, historically, been occasionally a coward - all bark with not bite - and caused much mischief that Laban was luckily able to bail him out of.