Captain Snow was a large snowy owl who lived on the outskirts of Mossflower Woods, and a direct descendant of Nyctea and Glacier. He was an old friend of Squire Julian Gingivere, but the two separated after a fierce argument regarding his carnivorous feeding habits, which resulted in Gingivere barring him from the barn where they had previously lived together. During a storm, Captain Snow became trapped under a large tree. Basil Stag Hare came to his rescue and the grateful bird gave him his medal for the effort. Matthias sought Snow out to learn the whereabouts of the snake Asmodeus Poisonteeth.

Infuriated with the bird's disbelief in his quest succeeding, Matthias struck a deal with him. If Matthias killed Asmodeus and brought back Martin the Warrior's sword, Captain Snow was never to eat a mouse or shrew again, and he would also apologize to Julian for his behavior. After Matthias victoriously returned from the quarry, Captain Snow, resignedly, kept his end of the deal, much to the delight of Matthias and the Guosim. He then apologized to Squire Julian Gingivere, but to his surprise Julian also apologized to him, and they both agreed to share half the blame regarding their quarrel. Captain Snow went back with Julian Gingivere to the farm.

After the final battle of the Late Rose Summer Wars, Captain Snow and Squire Julian Gingivere killed all the vermin trying to escape Mossflower Woods.

In The Lost Legends of Redwall

Captain Snow appears in The Lost Legends of Redwall: The Scout Act II. 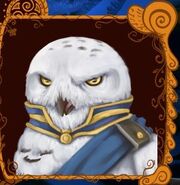 Captain Snow
Add an image to this gallery

Retrieved from "https://redwall.fandom.com/wiki/Captain_Snow?oldid=262809"
Community content is available under CC-BY-SA unless otherwise noted.