Cheesethief, one of the lower ranking rat-captains in Cluny the Scourge's horde, was very ambitious, and dreamed of promotion. He was also fiercely jealous of any possible rivals. When Scragg found favor with Cluny during the attempt to get into Redwall Abbey by means of a plank on a high elm tree, Cheesethief resolved to get rid of him.

When the plan backfired, Scragg survived the fall from the elm-tree, Cheesethief pretended to go back and help him, but instead suffocated him. Cheesethief eventually seemed to impress Cluny with his initiative with the battering-ram the horde uses in an attempt to break through the main gate of Redwall.

The ram, in fact, was a diversion to two other strategies to enter the Abbey. Cluny left the horde for a brief time, leaving Cheesethief in charge during his absence; a virtual promotion to second in command (the spot had been open since Redtooth's disappearance). Cheesethief stayed in Cluny's tent, putting on his full battle armor. Constance the badger built a huge crossbow in an attempt to slay Cluny, but unknowingly used it on Cheesethief, killing him with the monstrous candle snuffer she used as a makeshift arrow.

Cluny used Cheesethief's death as propaganda, stating that Cheesethief was planning to overthrow him and Constance had done him a favor by slaying him.

In The Lost Legends of Redwall

Cheesethief appears in The Lost Legends of Redwall: The Scout Act II as a foe of Liam Rivermouse and Sophia Ryemaid. They defeat him by dropping a barrel on his head and flooding Camp Silversands. 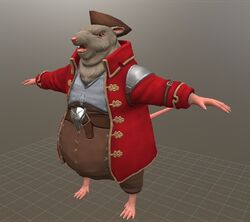 Retrieved from "https://redwall.fandom.com/wiki/Cheesethief?oldid=262879"
Community content is available under CC-BY-SA unless otherwise noted.