Dorabella Ivywain was the twin sister of Belladora Ivywain, the wife of Nillis, and the owner of the general store in Lilygrove.

Dorabella is a twin of Belladora and one of Lilygrove's 'upper crust.' As the owner of the general store she rules her home from a position of strength and competence and she is well aware of the privileges her social status has brought her along the way. Her husband, Nillis, and their two children were away on a trading trip when Lilygrove is attacked.General store owner and Upper-crust aristocrat - or closest Lilygrove has to it anyway. She was born into wealth and wears it with humble confidence. She is sharp and efficient, but ironically disorganized. 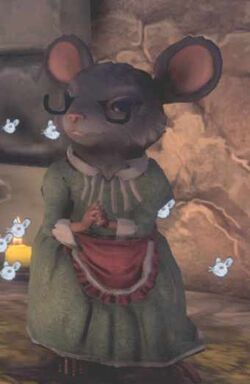 She was born into wealth and wears it with humble confidence. She is sharp and efficient, but ironically disorganized. She has a number of hidden talents in stealth and problem solving, but not so much in the arts. She has a husband, Nillis, and two children who were thankfully away on a trade trip during the attack. Her sons are adventurous and sweet, being the balance between their mother’s refinement and organization and their father's relaxed and studious work ethic. Dorabella is a woman with a plan and a marginally watered down version of Columbine - the two of which were fast friends growing up even if they did butt heads with their similar personalities. She loves her sister, but doesn't understand her carefree creative heart and thinks of her as flighty, irresponsible, naive, and frivolous. There is a hint of jealousy driving their relationship as Belladora tends to put fun and friendship over work and profit.