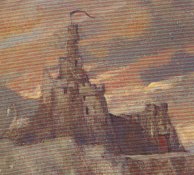 Fort Bladegirt was a fortress located on Terramort Isle. Anyone who controlled it was the King of Searats for as long as he or she held it.

Fort Bladegirt stood at the edge of high rocks near a cove. It was built of solid rock and was enclosed by heavy wooden doors, a courtyard, a highwall, and surrounded by high hills on three sides. The interior of the fort included a great banquet hall which featured, on one side, high windows overlooking the sea and, on the other side, a cloth wall hanging covering the wall from ceiling to floor. The hall contained the King's throne, carved out of rock and covered with the skins of slain enemies. Deep beneath the fort were located prison cells seeped in sea water. Underneath the hall a stairwell led to a pit where Gabool the Wild kept Skrabblag.

Fort Bladegirt at the time of Gabool was a savage and corrupt place, of which many searats feared returning to after voyages at sea. Gabool also had many slaves brought to the Isle who were then left to the mercy of the tyrannical ruler's mercurial temper.

After the defeat of Gabool the Wild, the fort was burned down and gutted by Rawnblade Widestripe and his companions of the Trag.

Bladegirt appeared in Mariel of Redwall.