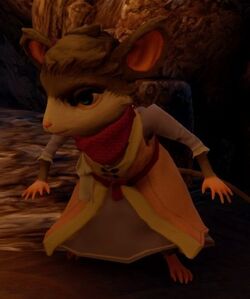 Foxglove Brooker was a Lilygrove resident and the betrothed of Brunach Wheelwright; the pair have intentions of marrying. Both were captured by sea rats after fleeing Lilygrove and imprisoned in Camp Silversands where they were forced to move barrels. Sophia Ryemaid rescued them.

Foxglove is a young mouse of Lilygrove who grew up friends with Sophia. At a glance, she is elegant, preppy, and sociable. She loves being around others, especially if she can be the star of the show. She always has a joke or some other two cents to add to a conversation. On occasion, she can seem overbearing and self-absorbed, especially with deeper topics.

However, under the right conditions and closeness, she reveals herself to be far more clever, philosophical, and caring than most would assume.

She fancies herself marrying her beau, Brunach, and moving to a less rural settlement with a focus less on agriculture and more on craftsmanship and finery.