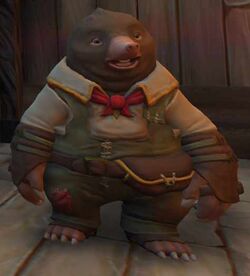 Glimber was a mole with a mole, and a miner at Camp Silversands. During the winter, he worked as a groundskeeper, and during the summer he was a regular worker.

Sophia Ryemaid encounters Glimber at Silversands when Scumsnout's rats had occupied the mine. He decides to travel with her and Liam Rivermouse to Winsome Wraith.

Glimber was raised in a small mole village near Camp Silversands. His father was a construction builder, often traveling great distances to help woodlanders construct their homes/towns/etc., and was good friends with Foremole. Because of this, Glimber had a sense of adventure and a yearning to see the world. Unfortunately, Glimber's father was killed on one of these journeys while Glimber was still quite young. Since then, he has done all he can to help care for his mother, who has a heart condition leaving her unable to work.

As a child, Glimber struggled to build close relationships. He has had a few friends and was frequently the target of teasing. Due to both his history of bullying and his father's death, he has become very fearful, anxious, and paranoid, overshadowing his yearning for adventure.

When Glimber's turn came for Diggabout, he did not travel far from home, instead opting to work at the Camp Silversands mine. There, he can still visit his mother and easily send her home his earnings. Glimber is quite the historian when given the opportunity to learn, and though he can neither read nor write, he enjoys collecting trinkeys found around the mine and surrounding area that can tell him a story of the history his world. He is also quite the cook, and his meals are some of the favored his co-moles. However due to his cowardice (which can make him rather annoying to those who lack a great deal of patience) he continues to have trouble befriending the mine's other moles. At present, they merely tolerate him.

Glimber is also something of a gardener, keeping a number of plants growing underground in the winter mines, and is currently perfecting his recipe for fertile soil. He also collects pretty stones, and even has a few that look as if flowers and ferns were embedded in them, which are his favorites.

Glimber is in his Diggabout season when Sophia and Liam meet him in Camp Silversands. Him choosing to continue onwards with them on their journey is his first step in overcoming his fear, learning to manage his anxiety, and becoming an adventurer like his father before him. 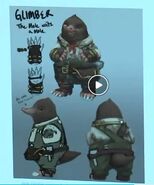