Guerilla Union of Shrews in Mossflower 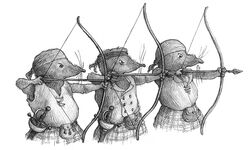 The Guerilla Union of Shrews in Mossflower or Guosim (pronounced [gaw-səm]) is a group of nomadic shrews that traverse Mossflower Woods and the surrounding country. They are water creatures that typically use logboats on the many streams and tributaries for transportation. An argumentative and indecisive bunch, they are nevertheless deadly in battle and never unwilling to help Redwall Abbey's residents or other good creatures, and often act as transportation, crew, or bodyguards. Their numbers can vary, ranging from 500 in Redwall to less than 40 in Marlfox.

The weapons of choice for the Guosim are small, deadly rapiers, they also use bows, and slings. They often wear brightly-colored headbands. The shrews love to eat, and Guosim cooks are considered to be some of the best in Mossflower, being known for their Shrewbread and Shrew Beer.

The Guosim are always led by a Log-a-Log, a tough shrew who commands the bunch and is usually a bit more relaxed and less quarrelsome than the average tribe member. Guosim law states that if a Log-a-Log is murdered, his death must be avenged, and the shrew that successfully avenges his death becomes the next Log-a-Log.

It should also be noted that in Redwall the tribe was portrayed differently than in later books. Not only did the group have the name "Guosim", an individual shrew was named Guosim as well. She also held the title "president of the shrew union", which was never referred to in future books.

The Bladechant was a singing ritual that Log-a-Log Osbil and his tribe performed. It is a challenge for battle; after the Bladechant is performed, the Guosim under most circumstances must face their enemy. In Eulalia!, it is stated that if the Log-a-Log is unable to lead the charge, the rest of the Guosim cannot attack.

Not all Guosim tribes are known to perform this ritual.

The Guosim is based off of the Liverpool longshoreman's union membership. In the Redwall TV Series, the Guosim are characterized as communists, and even speak in Russian accents.

The Guosim, or some form of it, appear in every Redwall novel with the exceptions of: