Matthias (IPA:mʌθɑiʌs), later called Matthias the Warrior, was a male mouse of Redwall Abbey and the husband of Cornflower, father of Mattimeo, and the grandfather of Martin II. The spirit of Martin the Warrior lived within him.

He was liked by many and expected by Abbot Mortimer to join the Order of Monks as a peaceful care-giver. However, Matthias had the spirit of a warrior, always yearning for more to life and he had a passion for fighting. Matthias, like his friend Methuselah, could understand the sparrows' strange way of speaking. No one knew who his family was; he was found alone outside of Redwall in Mossflower Woods when he was an infant.

After Abbot Mortimer and Brother Alf regale young Matthias and Cornflower about the heroes of Redwall's past, the Abbey leader informs the pair about the Warrior's Code, which was written by Abbess Germaine. They set about solving a series of riddles throughout Redwall, eventually discovering the code itself.

When Cluny the Scourge began the Late Rose Summer Wars against the Abbey, Matthias and seven others were made military commanders of the Abbey Defenders, with Matthias being among the most active. Matthias, along the way, had visions of his hero, Martin the Warrior, who guided him on his quest to find his sword, which Matthias intended to use to end Cluny's siege. Matthias later realized he was the successor of Martin (through the anagram "I Am That Is") and joined with Methuselah to find the sword. On the way he found Martin the Warrior's shield and swordbelt. Matthias followed the trail to the roof and the Sparra kingdom (earning a new friend in Warbeak), but was subsequently imprisoned by the mad King Bull Sparra.

In that time, Methuselah was slain by Chickenhound. Matthias was able to escape, but was badly injured in a fall from the roof due to Bull attacking. The two crashed into the Abbey Pond, and Bull died, but Matthias was able to be rescued and taken to the infirmary, while he was unconscious, Matthias was visited by Methuselah's ghost in his dreams, who urged him to go on his journey without him.

Matthias carried on his mission, despite losing Methuselah, and was able to retrieve the sword from the lair of Asmodeus the snake, beheading the beast in the process. When he returned to the Abbey, he defeated Cluny and became the Abbey Warrior. Matthias and Cornflower were married, and they soon had a son; Mattimeo.

After Cluny was killed by Matthias cutting the rope of the Joseph Bell, the great bell was recast into a set of twin bells. One of these was named after Matthias for his effort in the battle against Cluny. 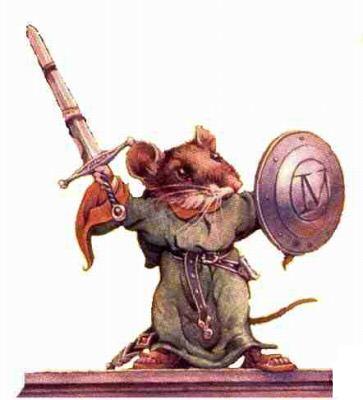 During the Summer of the Golden Plain, Mattimeo and his friends were taken by Slagar the Cruel, who was actually Chickenhound, and wanted revenge on the Abbey and its Warrior. Matthias vowed that he would find his son and all the missing young ones. He followed the slave trail to the underground kingdom of Malkariss.

Matthias and the woodlanders declared war on the Blackrobe Rats of Malkariss. After what was meant to be a one-on-one battle with the Wearet, Matthias fell from a great ledge in the underground kingdom and was believed to be dead. Down below the fighting Matthias freed Malkariss' slaves and turned them into his own army. While he worked his way back up to the ledge Matthias heard his son, Mattimeo, calling to him. In a mad charge to be reunited with him, Matthias suffered Bloodwrath, and fought like a berserker with nothing standing in his way. Matthias was then reunited with Mattimeo.

Outside, the group was confronted by Slagar, who had survived the massive cave-in of Malkariss. In a rage, Matthias and Orlando the Axe ran after him. Neither were able to kill him, though, as Slagar stumbled and fell to his death in an old well. Matthias, Mattimeo, and their friends returned to Redwall. Seven seasons later, he formally stepped down as Abbey Warrior and passed his sword onto Mattimeo. Matthias later died of old age.

Accounts of Matthias differ somewhat in the Nelvana television series from the novels. In Redwall, it is never explained how Matthias came to the Abbey, but the television show tells of how Cluny the Scourge burned his village in the north, and that he was carried to Redwall on the back of his sister Myrtle, who was not a character in the book.

According to series creator Steve Roberts, "Brian led the thinking [on Matthias' backstory]. Once we got the right idea I worked a few scenes up which he then reworked and we went on like that until he was satisfied."

Matthias is also described as age 13.

Matthias' relationship with Cornflower is more in-depth in the show, with the couple having problems.

Matthias appears in The Lost Legends of Redwall: The Scout Act III in the final level at Redwall Abbey, which occurs prior to the events of Redwall.

Matthias is a young apprentice at Redwall Abbey, but seemingly discontent with a life of quiet chores. Something within this mouse years for adventure and leadership.

Abandoned as an infant, his lineage remains shrouded in mystery. The Abbot could only assume some sad tragedy befell his parents, leaving the dibbun to be raised within the abbey's walls. Verily, Matthias feels the order's bond of brotherhood and sisterhood deeper than most other abbey mice. He is perhaps closest of all with Methuselah, who happily took the role of surrogate father and has walked with him throughout dibbunhood. 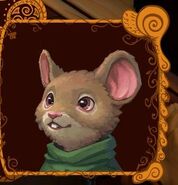 Matthias in The Scout Act III
Community content is available under CC-BY-SA unless otherwise noted.
Advertisement