Based on characters from various novels and officially licensed by Random House, the Redwall Figurines include Grumm, Martin the Warrior, Bungo, Matthias, and Laterose of Noonvale. Some were based on Troy Howell's cover designs and others were from her own imagination inspired by the pages she read. London sculpted more than the five her company Second Story Studios produced, but she settled on those five to make the first series with the approval of Brian Jacques, who enjoyed the figurines.

They were originally available for purchase at http://members.aol.com/redwallian/micehome.html.

The figurines are still available, but considered extremely rare. According to the website, all of the Redwall sculptures are completely sold out, with the exception of Grumm, of which there are limited quantities. 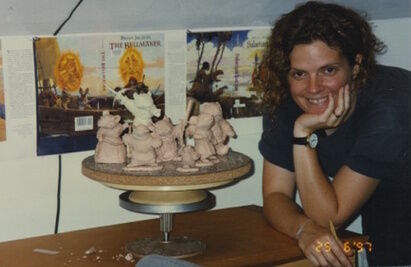 As of 2012, Julie London resides in California.

Quantities and original prices of the figurines are as follows:

The Entire Group
Add an image to this gallery

Retrieved from "https://redwall.fandom.com/wiki/Redwall_Figurines?oldid=261606"
Community content is available under CC-BY-SA unless otherwise noted.