Sam Squirrel, originally known as Silent Sam, was the son of Jess and Mr. Squirrel. During the Late Rose Summer Wars, he guided Matthias back to Redwall after he became lost. He helped defeat Cluny's battering ram by finding a hornet nest, which the Redwallers dropped on the ram. Basil Stag Hare gave him a small dagger, which he used when he appointed himself as Cornflower's bodyguard on her rounds to feed the sentries. At the final battle against Cluny, he steered Ambrose Spike around, since the hedgehog was curled into a ball, and couldn't see where he was going. He was known as 'Silent Sam' at first because he never spoke. Then he began to talk, relating the details of the Late Rose Summer Wars to Mattimeo, the young son of Matthias and Cornflower. The next summer was then aptly called the Summer of the Talking Squirrel.

Later, he was kidnapped by Slagar the Cruel along with Mattimeo, Cynthia Bankvole, Tim, and Tess Churchmouse, but was rescued by his mother, Matthias, Basil Stag Hare, and their friends and returned to Redwall Abbey. 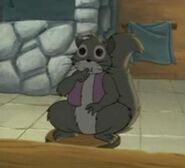 "Silent Sam", from Season 1 of the Redwall TV Series