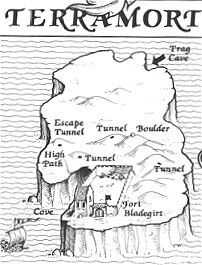 Terramort Isle was located in the far northwestern sea. It was the home of Gabool the Wild and his corsairs, as well as the location of Fort Bladegirt. A particularly unique feature of the island was the fact that it was crisscrossed by hundreds of tunnels, a characteristic utilized by the Trag. It was presumably fully abandoned after the defeat of Gabool and his searat army, with Bladegirt being gutted by Trag and Rawnblade Widestripe.

It is referred to in a poem as the 'Land of Death', which is the literal translation from the Latin "terra" meaning land, and "mortis", meaning death. The word "Terramort" is a portmanteau of the 2 Latin words.

Also, at the beginning of Salamandastron, one can observe the lower half of Terramort (with its apparent lack of Fort Bladegirt) at the top left corner of the map.

Terramort appears in Mariel of Redwall.