The Gloomer was an enormous, frightening, mindless black water rat that lived in the underground lake of Kotir and was controlled by Tsarmina Greeneyes and her army. Verdauga Greeneyes captured and imprisoned him long ago. He was used as a sort of attack animal to fight the wildcat's enemies. Upon Tsarmina's request, Brogg, Scratt, and Cludd fastened some leads on the Gloomer and Fortunata led Brogg, Scratt, and the beast into Mossflower Woods to fight. The Gloomer entered the waters of the River Moss and lost a battle with the vicious Stormfin, an enormous pike.

The Gloomer was blind and hard of hearing, but had enhanced smell. He did not exhibit self-consciousness and was veritably insane from many seasons of imprisonment in the dark lake.

In Escape the Gloomer and Caverns of Kotir, The Gloomer retreated beneath Kotir after the battle with Stormfin, and Gillig later encountered the rat as he hunted for Verdauga's lost Scroll of Inheritance. The rat was defeated by a den of snakes.

The Gloomer in Escape the Gloomer 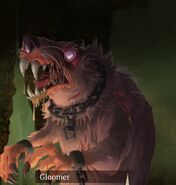 The Gloomer in Caverns of Kotir
Community content is available under CC-BY-SA unless otherwise noted.
Advertisement