Troy Howell is an American writer, artist and illustrator, known especially by his cover art for the Redwall series and Greek and Norse mythologies by Mary Pope Osborne. He is married with two children.

For the 10th Anniversary US edition of Redwall, Howell illustrated 6 full-page color images.

Troy was born in Long Beach, California. As a youth, Howell had an experience similar to Brian Jacques - a teacher couldn't believe that one of his writings was his own, and said that he had stolen it from a Boys Life magazine.

He began his art career at Cricket magazine.

Troy Howell has drawn the US covers for all the Redwall novels released thus far, as well as A Redwall Journal. Howell has also drawn covers for the Tenth and Twentieth Anniversary Editions of Redwall. 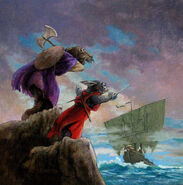