Tsarmina Greeneyes was a deranged female wildcat and the main antagonist of Mossflower. She was the daughter of Verdauga, the sister of Gingivere, the niece of Ungatt Trunn and the granddaughter of King Mortspear. Tsarmina was wicked, cruel, partly insane, deathly afraid of water, and very intelligent. She broke the Sword of Martin the Warrior and demanded his execution when he was brought before her father for criminal judgment. Martin then vowed to slay her one day which she unwisely chose not to take seriously.

Tsarmina had her ill father murdered by Fortunata, who poisoned him. She then blamed the murder on her hapless brother, and subsequently had him imprisoned in Kotir's dungeons.

Tsarmina was determined to rule all of Mossflower and enslave the resident woodlanders. She waged a long war against the Corim, who rebelled with guerrilla tactics. She frequently had frightening dreams of drowning in water, by far her greatest fear after she took the throne. She tried to kill Argulor whenever she had the chance, but the eagle always flew out of range of her bow and arrow. She later joined forces with the mercenary Bane, who was traveling through Mossflower with his band. Bane saw Kotir and sought to conquer it. When Tsarmina discovered this, she tricked him into his own death, using him as bait for Argulor and eliminating two enemies at once.

The final blow arrived when the woodlanders flooded Kotir, taking advantage of Tsarmina's aquaphobia. The fortress was brought down by a concerted assault by the Corim, during which the rebels used a ballista to pound it into rubble. Thinking her brother Gingivere, who had escaped his cruel confinement, was plotting against her, Tsarmina grew crazy and paranoid. Her most loyal General, Brogg, managed to construct a makeshift boat out of a table, forging an escape route for them before the fortress collapsed completely, but Tsarmina chose to abandon Brogg instead.

As Tsarmina fled the ruined fortress, Martin the Warrior engaged her. Tsarmina proved to be a ferocious opponent for Martin and even destroyed his armor with her claws, but after a long and grueling battle, she was eventually pushed back into the lake, her crippling fear of water, together with her accumulated wounds and apparent inability to swim, caused her to drown just like in her dream.

The Thousand Eye Army was subsequently disbanded, putting a permanent end to her rule over Mossflower. 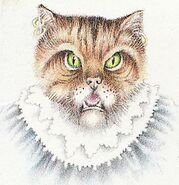 Tsarmina Greeneyes in her war gear 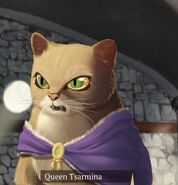